Henleys: usually when we see them, we think of pioneers and prospectors, toiling and sweating in the Wild West, their buttoned-up undershirt stained with blood, coal, or worse. Your average miner in the 1890s did wear a button-up under his clothes in cold weather, but instead of a henley shirt it was more likely a one-piece "union suit," or what we call "long underwear" these days: 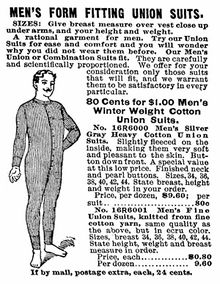 However, in the late 1890s we find examples of standalone henley shirts with a shorter placket worn as underwear: Underwear came in both cotton and wool, and in some cases were touted as "health underwear": So where did the standalone, T-shirt henley come from? And why am I talking about all this? (Well, more on that later). The Information Superhighway claims it's from the English town of Henley-on-Thames, west of London in Oxfordshire, home of the Henley Royal Regatta, whose rowing teams originally wore a button-up style T-shirt as part of their uniform in the 1890s: Illustration of rowers at the earliest Henley Royal Regatta, two of them wearing henley shirts.

The henley shirts were made of unbleached cotton, sometimes referred to as ecru, or white gauze for summertime, and wool for winter. The shirts remained popular with rowing teams until the 1940s. At some point in the 20th century (when is still unclear to me) a New York merchant was trying to sell men's undergarments to a Ralph Lauren buyer, who looked at the button-up undershirt and declared "This is a new shirt." Now, there's no telling if that was what really kicked off the henley-as-fashion-statement beginning, but it seems likely enough given henleys, and even T-shirts, were at best work or sports clothing, and at worst simply underwear and not something you'd wear out on the town. These days the henley is a pretty versatile piece that works as both underwear and outerwear, in long and short-sleeved iterations. Personally speaking, I'm partial to them, though my most recent one had to be thrown out as it was permanently sweaty smelling (and I didn't know about using mouth wash to disinfect clothing--pro-tip). In terms of The Rite Stuff, my plan in August was to create a couple smaller items than the Heracles to give you some more variety and have a more well-rounded collection, hence the scarves from my previous post. I also wanted to create a tubular body construction T-shirt, with a pocket inspired by the Reliance Mfg. Co.'s Black Beauty shirt from the 1920s: However, the timing on the T-shirt seemed a problem, as it would likely be ready sometime in winter. Aside from our Australian or Southeast Asian friends, it seemed to me that not many people would be interested in a short-sleeved T-shirt in December. Thus, I changed gears and began drawing up a long-sleeve henley. I love this as a garment because it's just as functional as it is attractive, and these days it's very much approved by polite society, maybe thanks to Ryan Gosling. "This shirt? Oh, it's OK. You should see the one The Rite Stuff is coming out with, babe."

With plans to start making the sample in mid-September, the timeline right now is to get the long-sleeve henley by December. Of course I'd need buttons, and this is something I spent a while thinking about. I thought about using the same painted metal buttons from the Heracles, but it turned out to be difficult to get a satisfactory color down. I'd also had the contact in my back pocket of a pearl button maker, so I asked them to make brown Mother of Pearl fisheye buttons in a 14 mm width (the best size for work clothing). This is what arrived: My plan is to use the same buttons for an ecru version of the Heracles chambray shirt down the line, and perhaps in the future the indigo Heracles could use a dark blue Mother of Pearl. Back to the long-sleeve henley, of course I'd have to draw up a design, which I did: With design and buttons ready, it was time to wait again, but before that the sample for the scarves should arrive first!